We took a look at how biology might inform how we think about the Internet of Things.
___

As part of The V&A Museum's Digital Futures show, we were asked to consider the future of networked objects.

Parasitic Products examines the idea of an alternative route for product design development, where competition, and product interdependence shape the design of the objects in our environment. The work questions if processes which have evolved in nature, such as parasitism, can be used to influence an alternative paradigm of product design ‘evolution’. Using biology to inspire design is in no way a new approach, but it is often viewed as a heroic discourse, neglecting the aggressive, predatory, and often ruthless lifestyle typical of most organisms. Parasitic Products highlights the importance deviance as a way to instigate paradigm shift in design.

As more objects become connected to the internet, and one another, it is plausible to imagine devices which pervert and exploit systems and objects to their own advantage. Parasitism has been a practice exhibited for millions of years. What effect would parasitic devices have on a product ecology?

A comparison to parasitism and real world parasites have shaped the first set of prototypes developed. The Parasitic Products created in this initial stage of the project are three radios which each take inspiration from the characteristics of three biological parasites – the hookworm, the gall wasp, and the ichneumon family of parasitic wasps.

Specimen A takes its power from telephones and phone lines. By connecting one end to the phone socket in the wall, and the other to the corded phone, the Parasitic Product gets its power at the expense of the telephone. Inspired by the hookworm, a minute worm which lives in the gut of its host, the parasitic radio causes the phone line to become permanently engaged, and jams wifi in a 10m radius. Hookworms block the communication channels of the host body’s immune system, meaning the host often wont even realise they are being parasitised.

Specimen B uses a chemical reaction between zinc and copper in an acidic solution to create electrical energy. To create the ideal environment for this reaction, the radio pierces two metal electrodes into a carton of milk or juice, and injects a small amount of salt. This salt helps speed up the reaction whilst also changing the chemical structure of the milk or juice. When the electricity is produced, it charges an internal battery.

The Knopper Gall Wasp also uses chemical reactions to modify the chemical and physical environment of its host for its own benefit. By injecting a cocktail of chemicals and genetic information into a budding acorn, it causes a change at the genetic level in the plant, causing it to grow into a hard, horned structure providing food and safety for the wasp larvae.

The Ichneumon family of wasps are extremely prevalent, with some parasitising other parasites. The behaviour of an iPhone can be thought of as being parasitic – it can take its power from a laptop, it spreads its code/software via other devices or the internet, it has changed the behaviour of its users. Specimen C uses this parasite for its own power. By connecting the iPhone to the 30 pin connector in the opening, the Parasitic radio tricks the iPhone into thinking it is a genuine apple accessory, causing the iPhone to happily give up its power to the radio.

Radios were chosen as the subject of this project for a number of reasons. They have had an almost unrivalled place in society, in both domestic and working environments, for over 80 years. The radio is a product almost everyone is familiar with. This familiarity serves to enhance the impact of these Parasitic Products conceptually. In addition to this, the radio as a device has flirted with a a parasitic lifestyle already. In the 1930s, when electrical products were first domesticated, as a novel technology, the radio found its way into the home via other more established objects such as armchairs, sideboards and drinks cabinets. Adrian Forty called this era in the radio’s evolution, the period of suppression. If compared to the evolutionary tree of a biological organism, it could be at this point when parasitic radios could have branched off.

A copy of the evolutionary timeline can be seen here 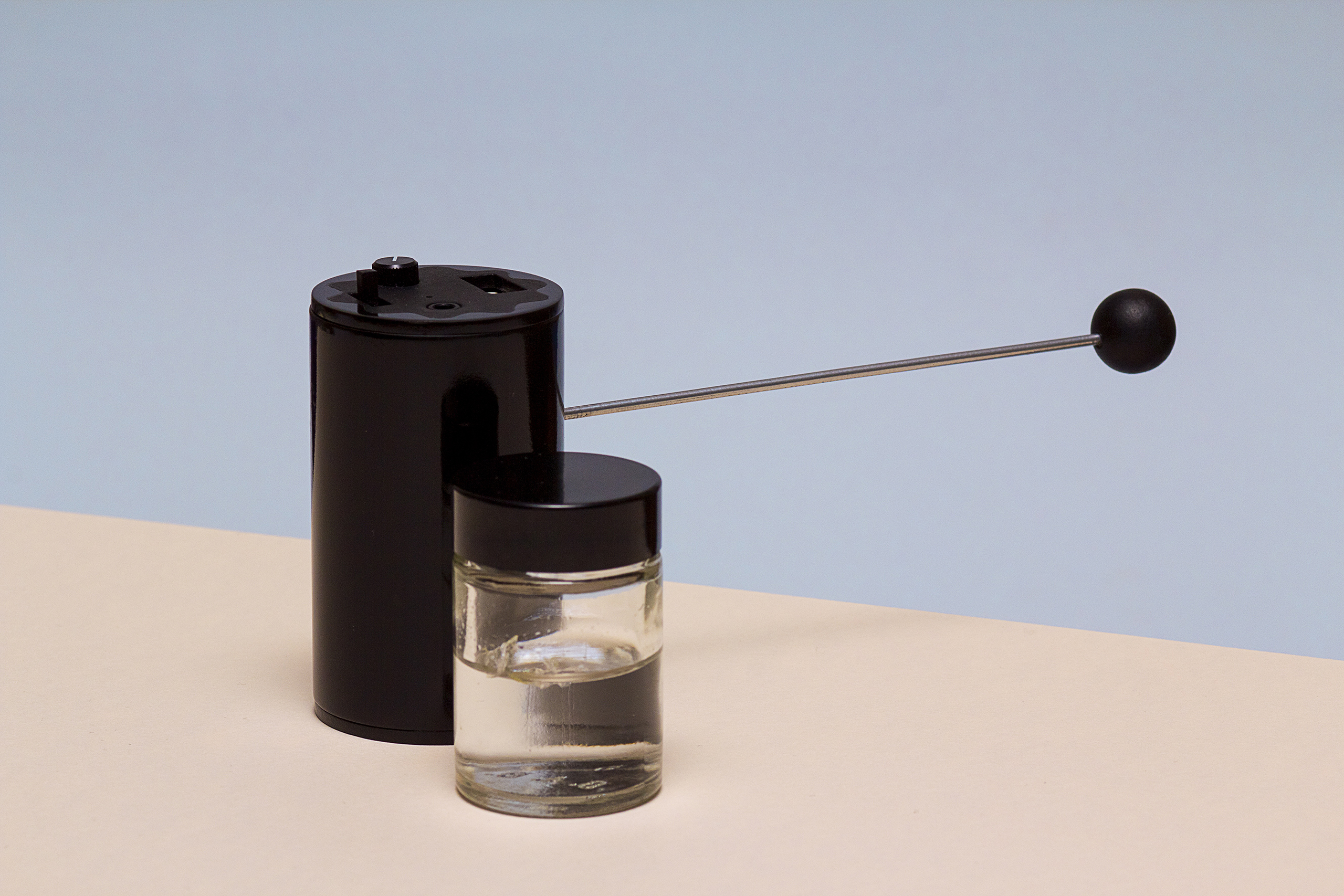 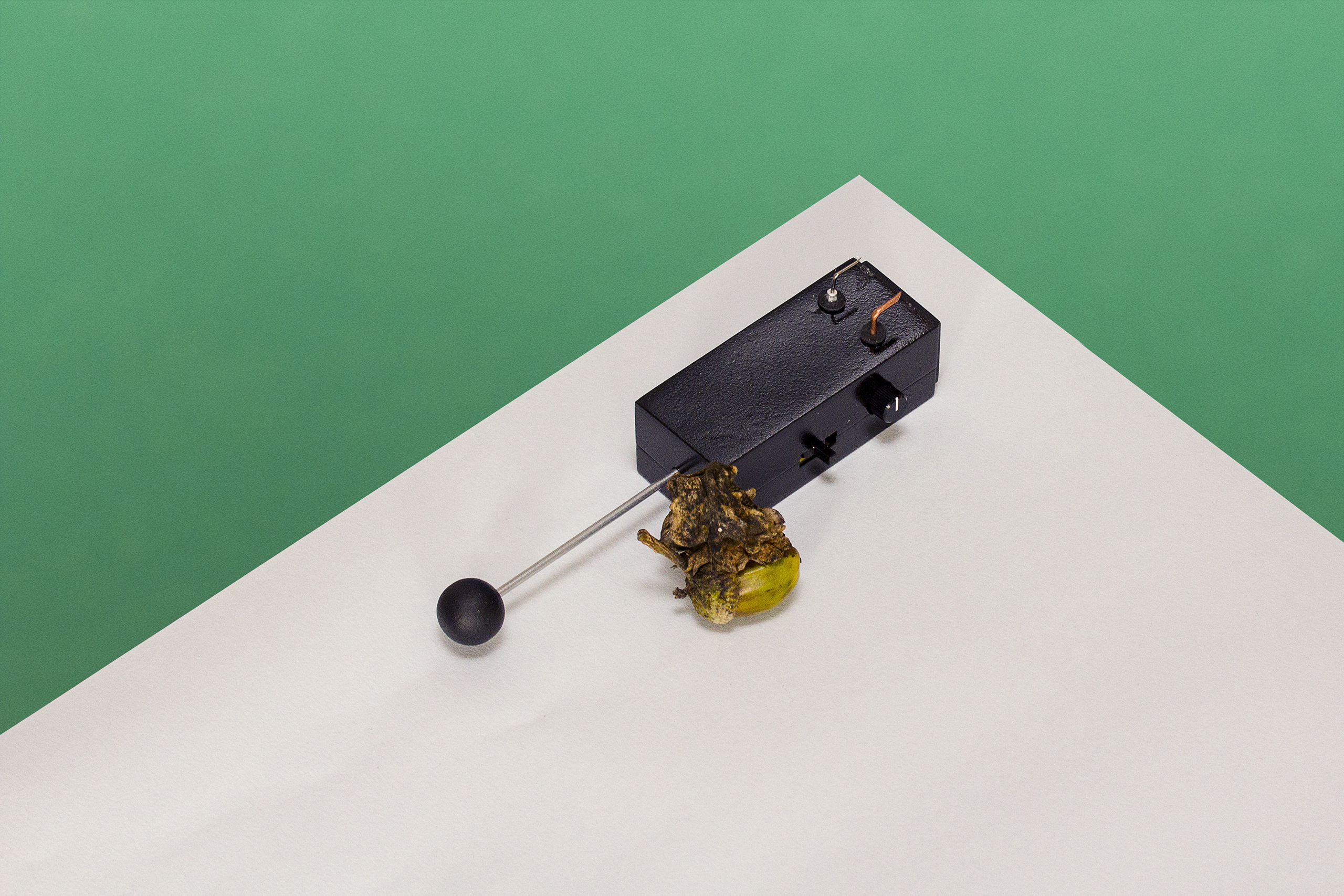 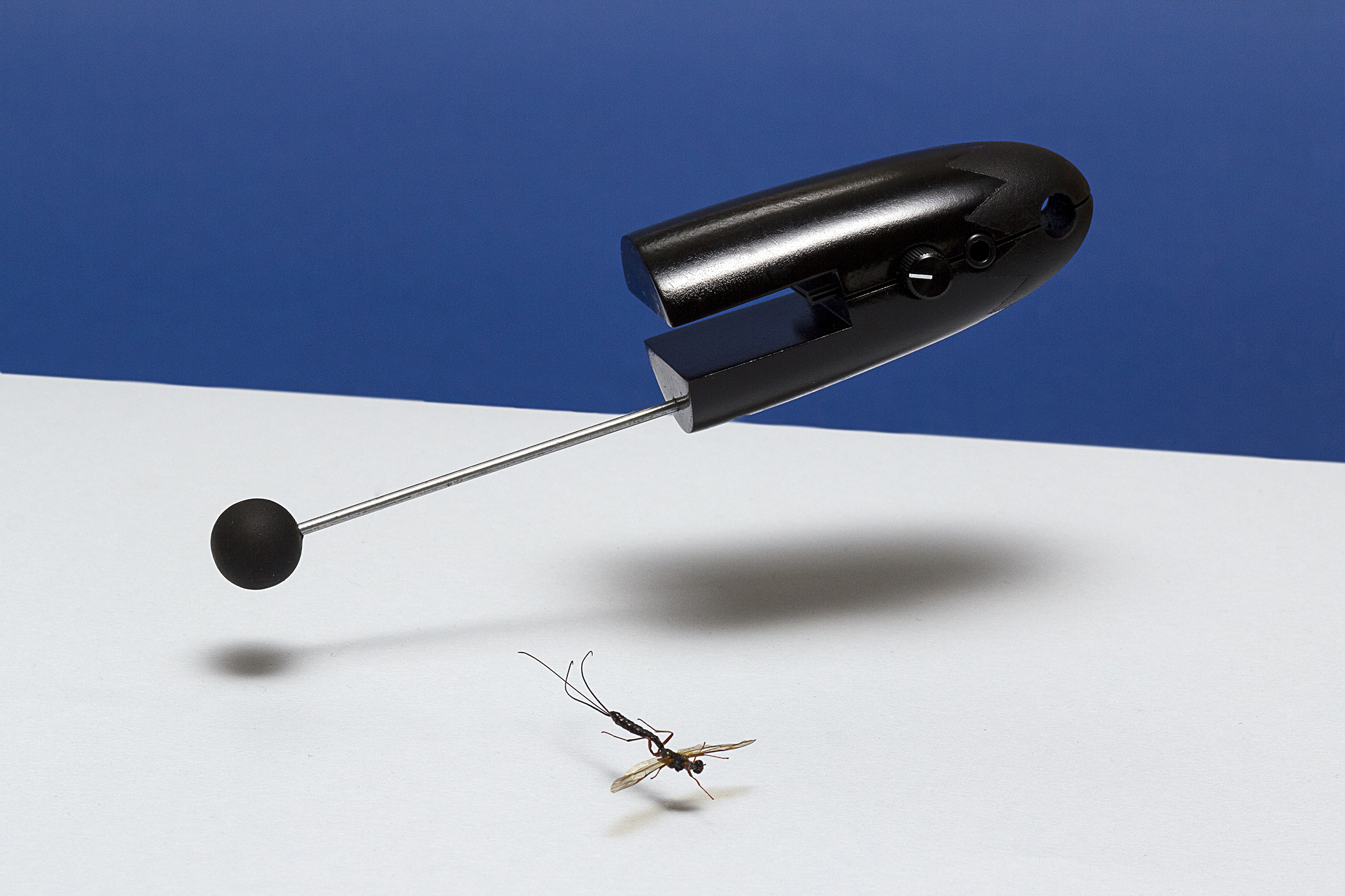 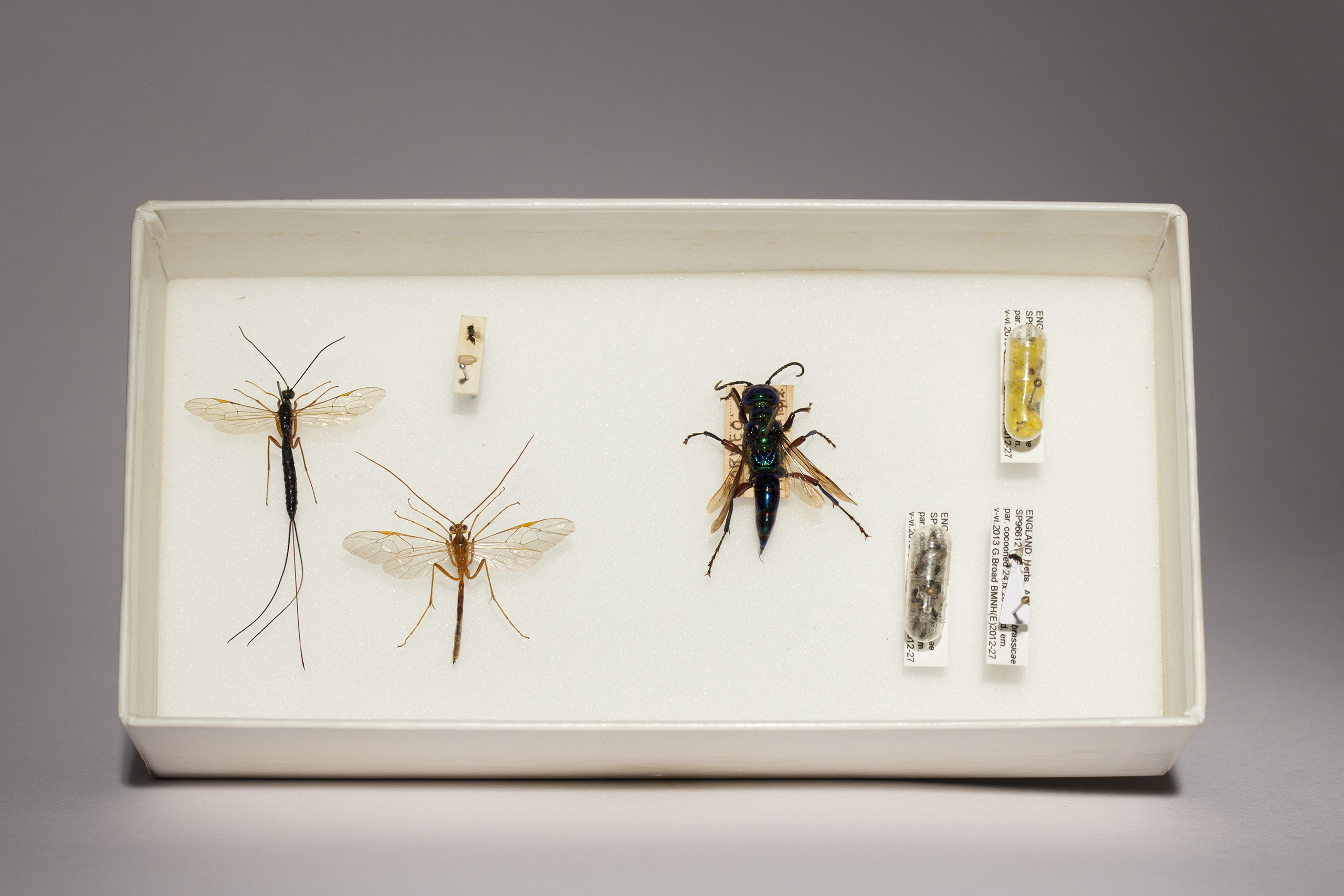 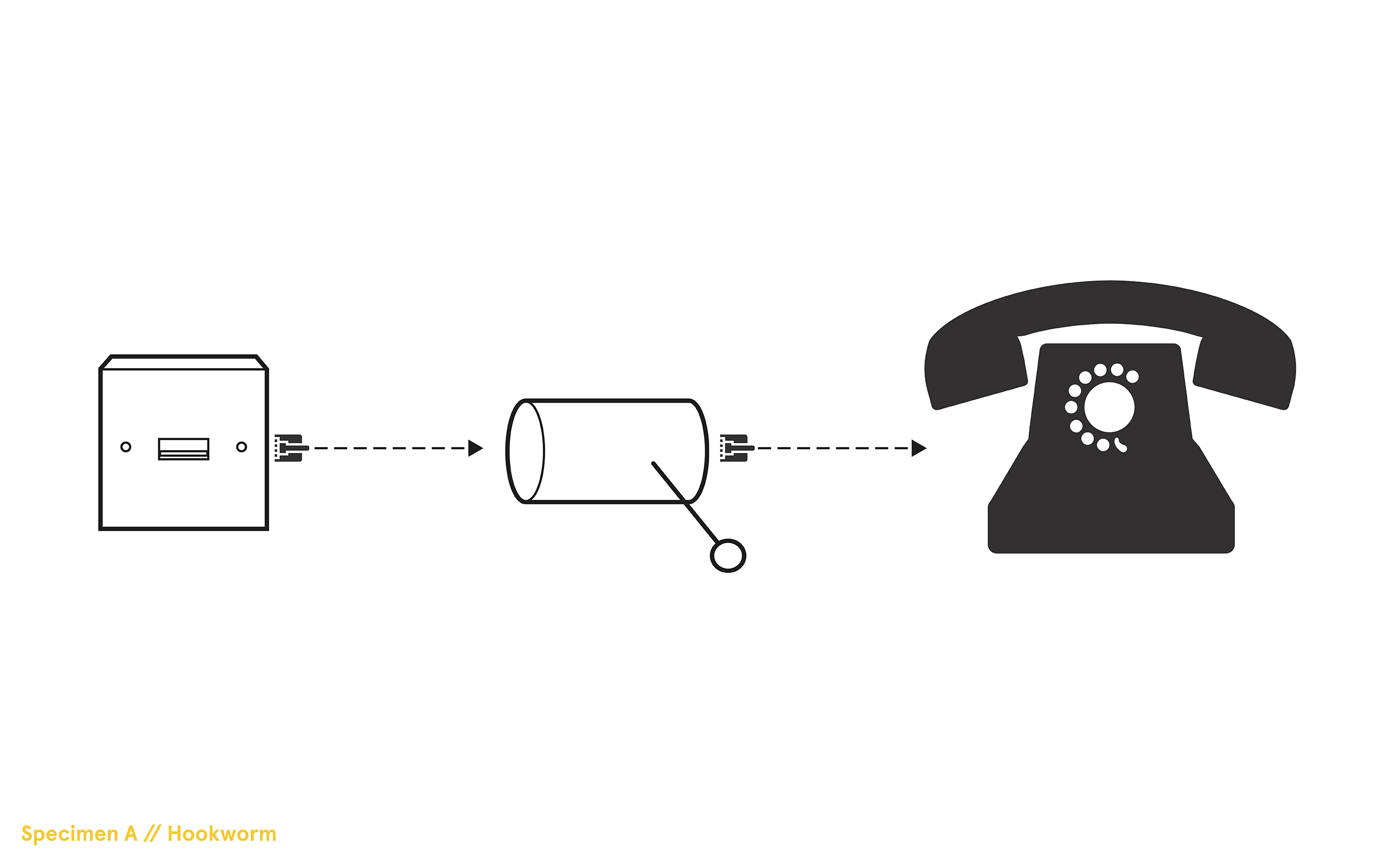 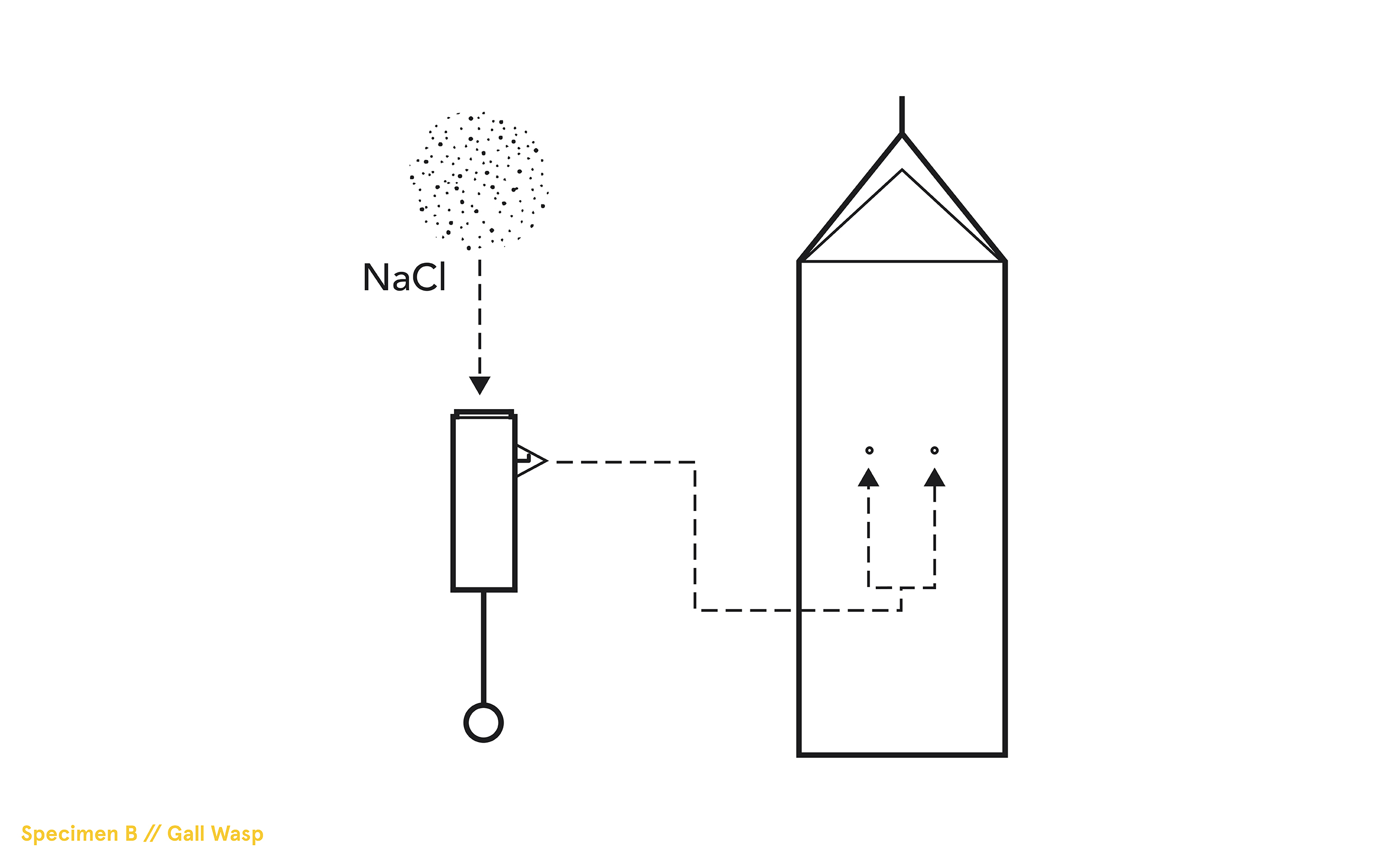 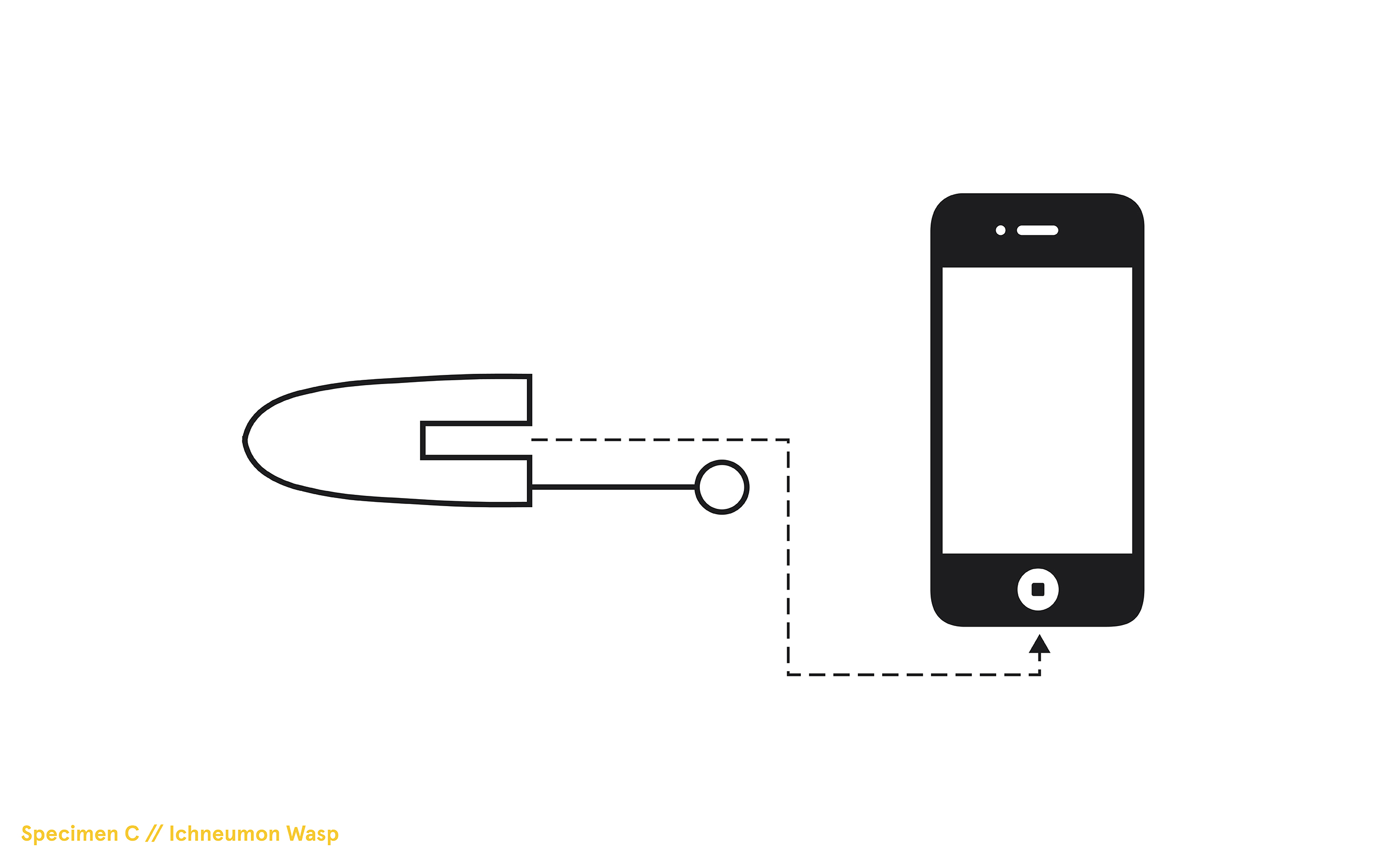 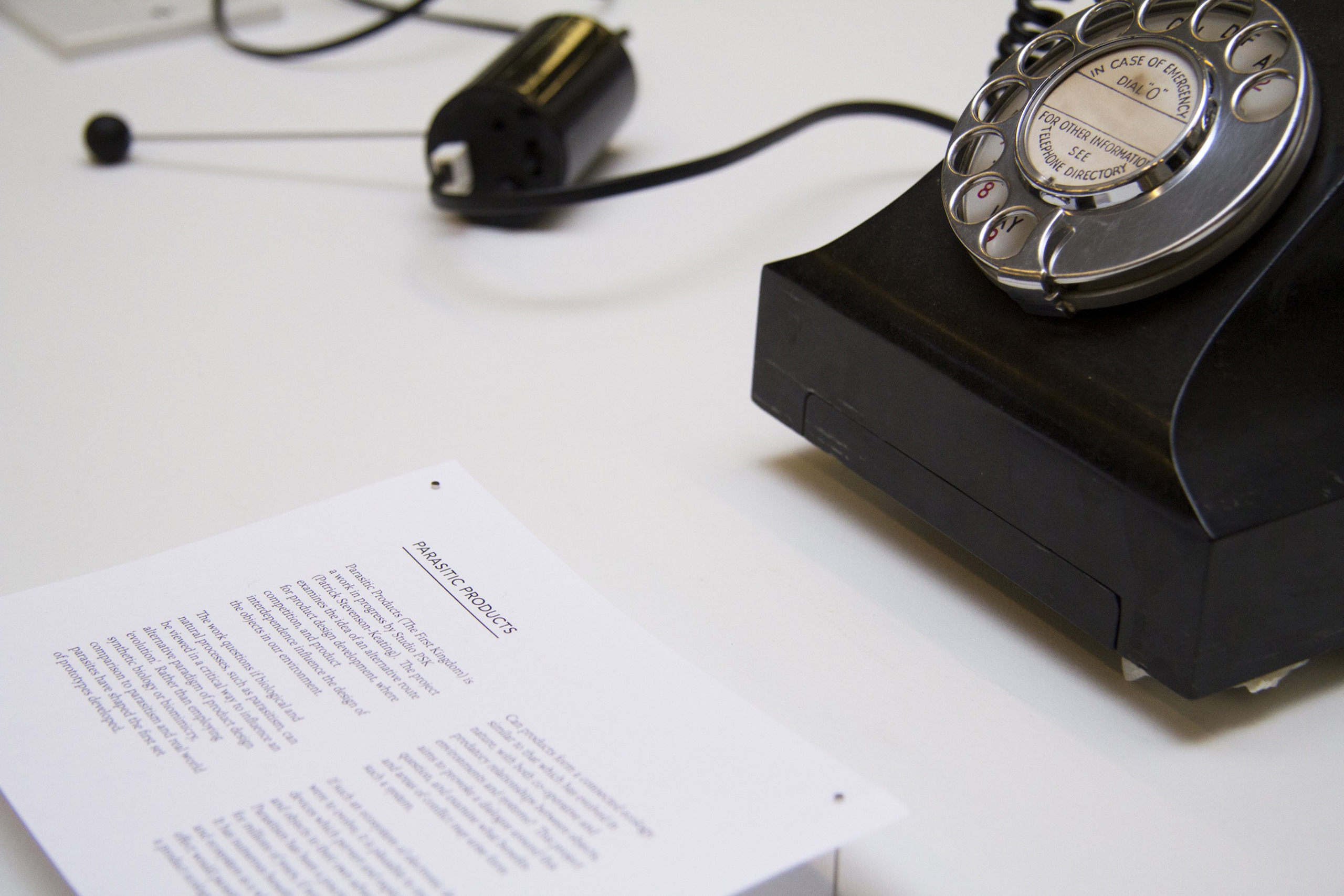 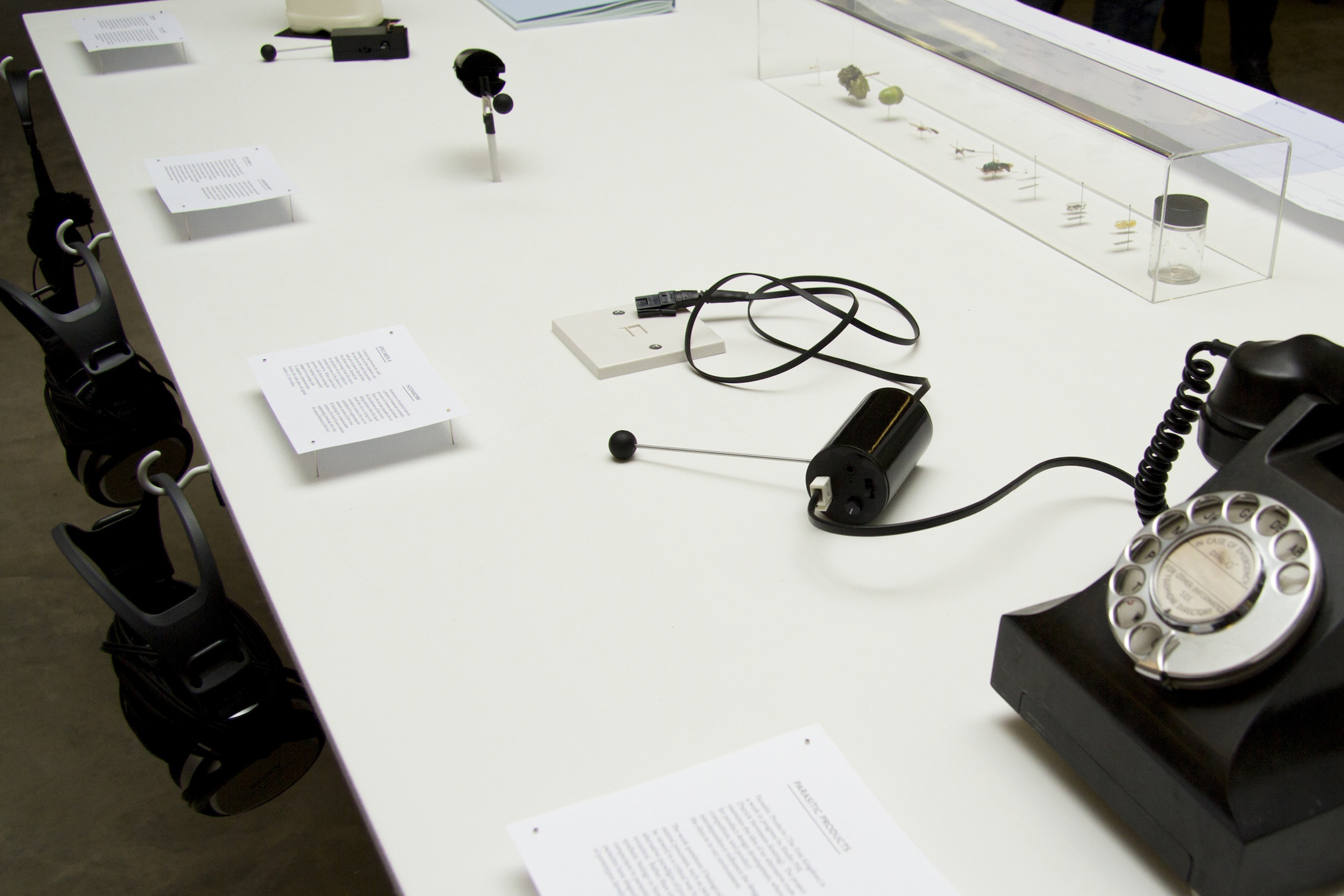 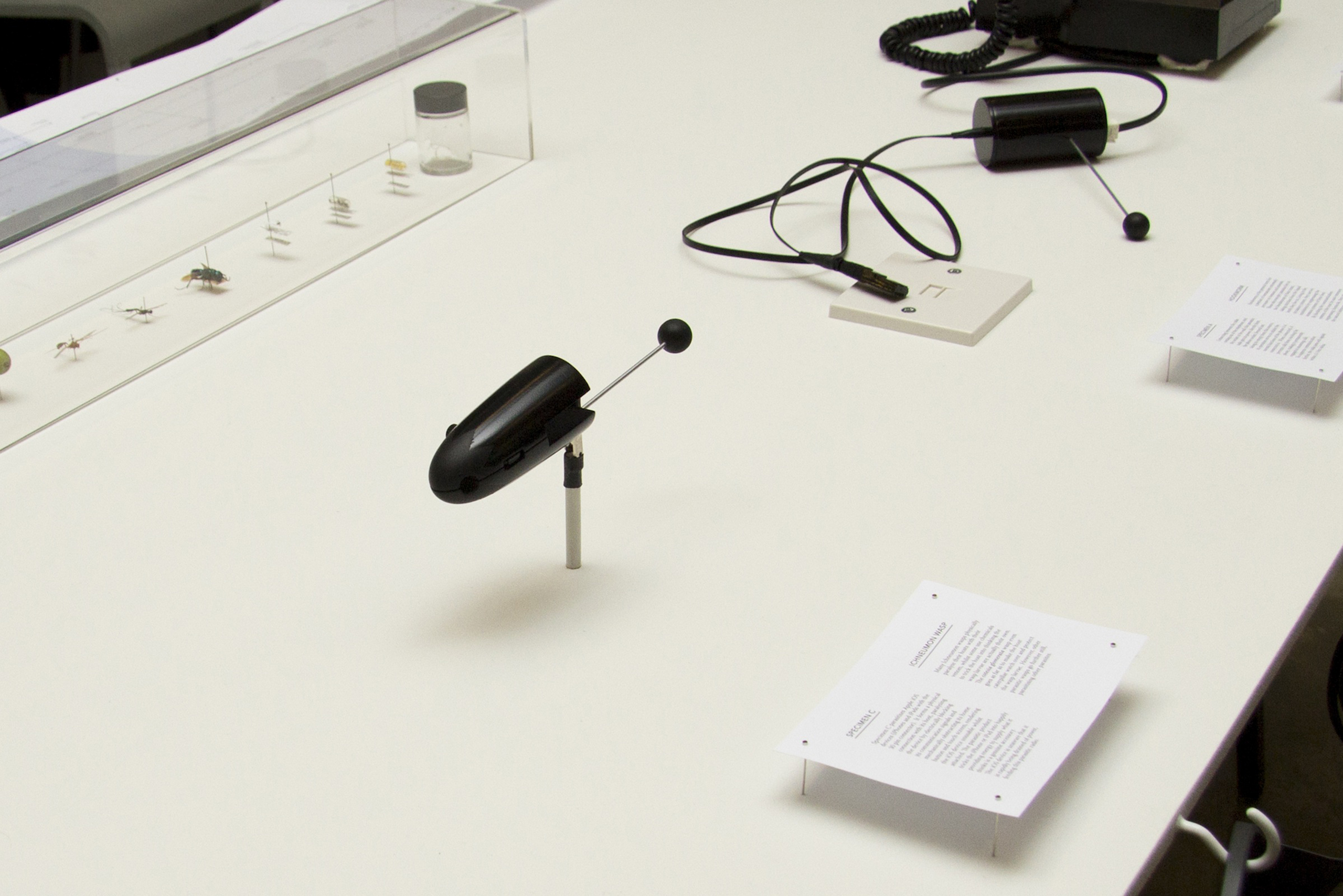